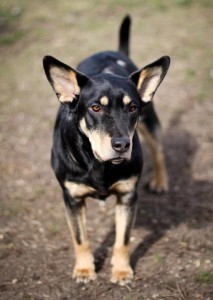 Seizures in Dogs and Cats

Pictured is Sandy, a 3 year old, Mixed breed dog, from Wall Township, NJ.  Sandy was adopted from Wag on Inn Rescue almost 2 years ago. She has epileptic seizures.

Seizures in felines and canines are abnormal brain activity, and nerve cell firing that are usually manifested as a sudden onset of convulsing.  Common signs of a grand mal seizure may include one or more of the following: uncontrollable shaking, convulsing, stiffness, chomping at the jaw, salivating, urinating, paddling while laying on side and being mentally  “out of it” unaware of surroundings.   Pets can also have partial or focal seizures that may manifest as facial or leg twitching.  Seizures generally last up to 2-3 minutes, then the pet enters the post-ictal (after seizure) phase.  This phase may be absent entirely, may last a few minutes or possibly hours.  Pets in the post-ictal phase may be temporarily blind or disorientated, then they usually quickly get back to normal.

The most common cause of seizures is epilepsy, which is a genetic predisposition to seizures, or idiopathic epilepsy where seizures just occur without any identifiable underlying cause.  Epilepsy usually occurs in cats and dogs between 6 months of age and 6 years.  If seizures occur in pets younger or older than that, then there is a high likelihood that there is an underlying cause beside epilepsy.  Other causes of seizures may include liver disease, low sugar levels in the blood, inflammatory conditions in the brain (GME), increased pressure in the brain, a variety of infections-viruses, bacteria and parasites, toxins, trauma, structural lesions in the brain, space occupying lesions in the brain and brain tumors, especially in older animals.

Age of pet, history of pet and specifics of seizures usually give the veterinarian a strong clue if it is due to epilepsy or not.  Blood work and X-RAYS may typically be done to help diagnose the cause of seizures, but an MRI of the brain by a veterinary neurologist is oftentimes needed for a definitive diagnosis and treatment course.

For epilepsy usually one or both of the drugs,  Potassium Bromide or Phenobarbital, are usually used as first line drugs to decrease the severity and or frequency of seizures.  These medications usually have a very good success rate.  Treatments for the other causes of seizures are specifically tailored to the particular underlying cause.

Usually the prognosis is very good for controlling epileptic signs, but can be variable.  Prognosis varies widely for other cause of seizures.  For old cats with meningioma tumors in the brain prognosis is excellent with surgical removal.

If You Would like More Detailed Information on Seizures please check out the link below!

Come check out our cozy office, get aquainted with our knowledgeable staff and schedule your appointment today, please do not hesitate to get in touch! We will make it the best experience possible for you and your four legged friend!
Squan Animal Hospital LLC
1427 Lakewood Rd
Manasquan, NJ 08736
Phone: 732-528-9199
Fax: 732-528-0769
E-Mail: cs@squananimalhospital.com